Söderarm lighthouse on Torskär is a listed monument and has been a lookout point since the Middle Age.

Tourist attraction
Söderarm lighthouse was built in 1839. Here was once both a lighthouse and pilot station. The island had a resident population and also the lighthouse Tjärven north of Söderarm was manned by staff who lived on Söderarm. There was even a school with at most seven children. The maritime administration's operations were shut down September 30, 1997. Today the lighthouse is  a national monument and there is a conference center on Söderarm that is open year round. Here, you can arrange a unique conference with both peace and quiet and a possibility of adventure. No group is too small, but some are too big. Söderarm AB can not host more than 23 people in a conference / meeting / customer arrangement with dinner in the tower and overnight stay. Celebrations / parties or the like can be arranged for 50 people of which 33 can stay overnight.

Söderarm AB has decorated the houses like the homes they once were, giving a true feeling of home far from ordinary conference environment. Each group gets our full attention and service because we receive only one group at a time.

Activities
In addition to the beautiful scenery and the nice surroundings on the island, we also offer activities. For example, our world unique wood-fired "bunker sauna" with hot tub, Söderarm fyrkamp, croquet (somewhat awkward because poor lawns!), spin fishing, kayaks and rowing boats. You can also take part in skeet shooting, archery and guided tours of the lighthouse. We also organize team building, boat excursions, sailing and RIB boat trips in our beautiful archipelago. 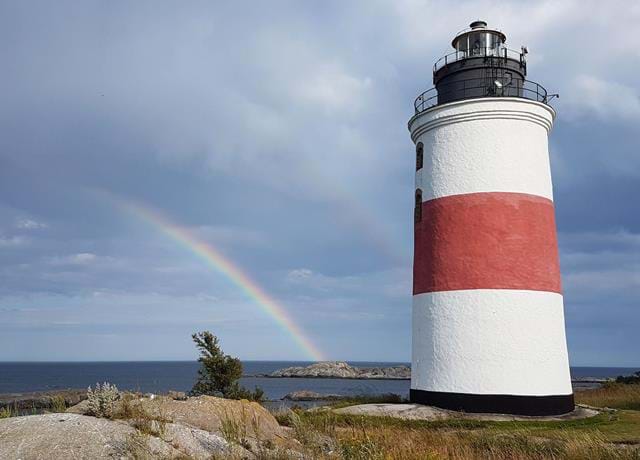 Söderarm lighthouse is located on the island Torskär far out in the archipelago. Here you find a unique little confe...

Lighthouse keepers cottages with amazing views in a peaceful location. Söderarm in the outer archipelago is an absolu...

It is about 1 hour from central Stockholm or Arlanda to the harbour/jetty in Räfsnäs. From Räfsnäs you take a taxi boat to Söderarm island. It takes about 30 minutes. Contact us so we can arrange the taxi boat.